I speak about my musical path, my latest single 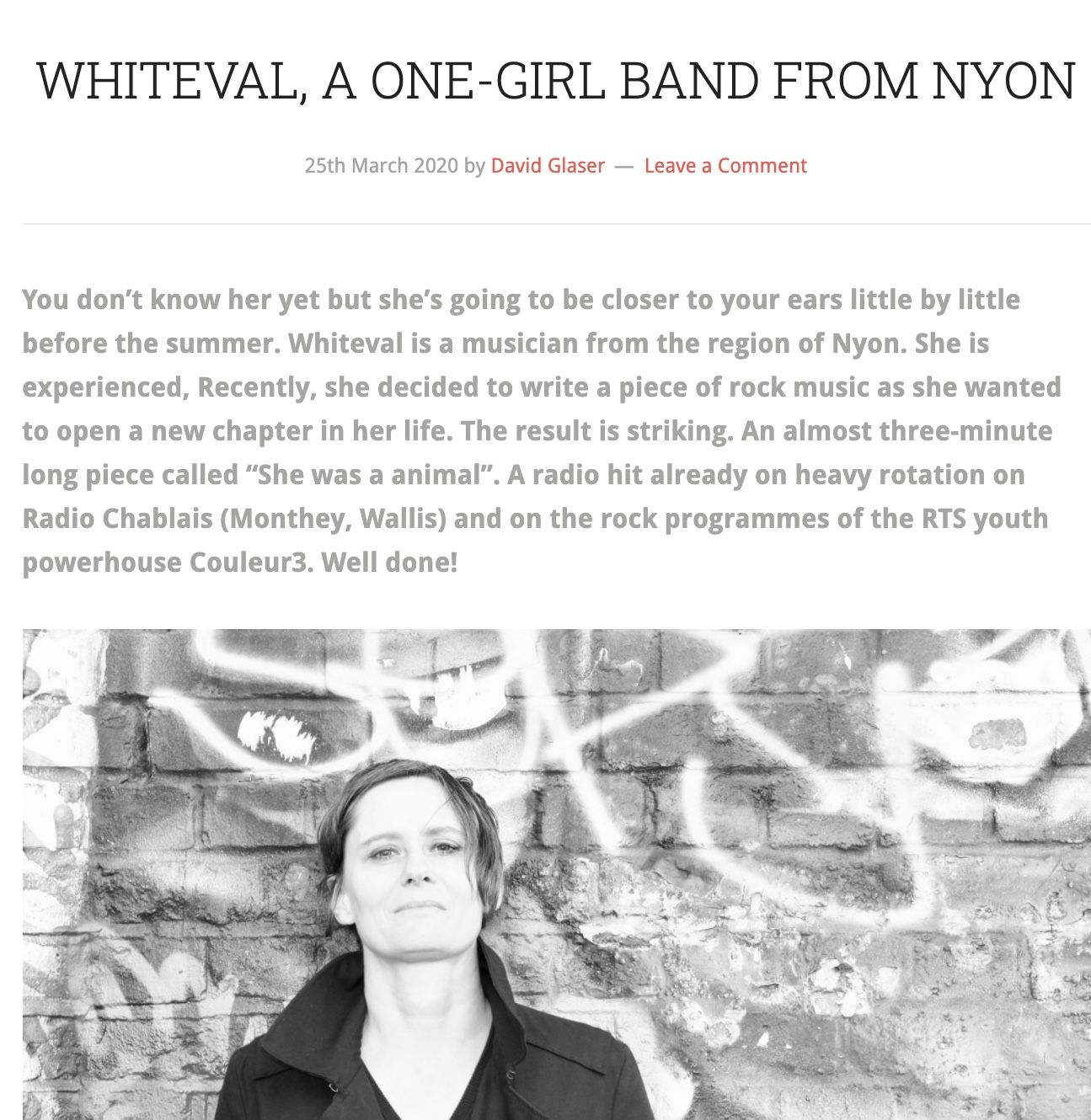 “She was an animal” and my take so far on streaming.

The interview was originally published in french on web magazine Suississimo.

Have a good reading!

WHITEVAL on THE SWISS MUSIC SHOW

An Interview by David Glaser

1. Can you introduce yourself?

I am Whiteval, an alternative rock singer-guitarist and songwriter from the Nyon area in Switzerland. I am an independent musician in the music business and I publish my songs independently for now, on my website and other online music stores.

2. What is your musical education? What did attract you to music?

My mother must have noticed my interest in music, since I spent a lot of time playing on a little Bontempi chord organ toy. I really loved this thing! So she proposed me to take either piano or guitar lesson, and I chose guitar with no hesitation.

A started those lessons when I was eight, at first in an academic way through a conservatory of music. Then with two independent electric guitar teachers who not only taught me more about guitar techniques but also about music theory, and also encouraged my songwriting talent.

3. What were your first bands? How did the public welcome your songs and your shows?

I formed my first band at 13 with my neighbours and a friend. The drums were iron cookie boxes that we used to hit hard for hours in my room, at the expense of my mother’s nerves. She must have regretted encouraging me on that path at this time. Then came my second band and my first show at 15 with my best friend, at my high school in Nyon.

I started music professionally at 19 after having graduated and put a band together based on my songs. My early musical style was rather eccentric and generated either very positive or definitely negative reactions. I moved on to a progressive rock band ( also with my best friend) that enjoyed a reasonable amount of success at the time. The musical style was a bit difficult to access but people loved us live very much.

4. Today you do everything on your own, is that more convenient?

After giving a lot in group experiences, I realised that my path was to be a solo artist, which was my intention at the beginning of my career. As I am a multi-instrumentalist (vocal-guitar-bass-drums-piano) and self-taught in sound recording, I can do everything on my own. There are advantages of proceeding that way, like the flexibility of doing what I want, when I want without depending on other people’s availabilities. Financially I also don’t have to pay session musicians. I also love to come up with my own arrangements, I hear them in my head and it goes faster to play them myself in the moment, when inspiration hits.

Negatively, the workload is big and one can feel lonely at times. It is definitely great fun to collaborate, and I have beautiful memories, but the universe has shown me through experience that it was not my path to succeed in a group situation.

5. Managing to make a living from one’s music has become an even greater fight since the arrival of streaming, what are your choices so that this economy can be sustainable?

I still have a hard time positioning myself on that subject, I’m still reflecting about it. I admit being reticent to upload my music without further thinking on the big mass streaming platforms, because of the scandalously low way in which artists are paid. This question is particularly relevant in March 2020, at the time that I am answering it, with the consequences present and future on musicians due to the Coronavirus pandemic COVID-19.

The big winner of the streaming game is the user, even before big labels who are the second big beneficiaries of this system. Big record labels generate huge quantities of streams by investing important budgets for their artist’s promotion, which allows to compensate more or less the laughable income of a stream. On their part, users have access to millions of songs for a negligible price. It’s a tempting offer and it is so convenient to have all this music centralised on one application. By itself I would find the idea great, if it were not for the fact that people do not realise the financial dynamic behind the purchase of a subscription. They don’t realise the consequences on music and their creators if we continue to function following only that model. There is the argument that artists must use these services to build a following who might come to their shows. However I feel that proportionally few people convert their listening in concert tickets, and even if it were the other way around, it wouldn’t change the fact that in order to compensate the loss on music sales, tickets are increasing more and more and we might end up with society in which going to a rock show is a luxury, for the wealthy or extremely well-off. Is this really what we want?

The price of subscriptions will not change, so I think that the solution resides in informing as much a possible. Many people who are using the big streaming platforms adore music and respect artists, but are not aware of the economical reality behind it. When one really loves music, a streaming subscription is not enough. One must find their own rules, for instance buy the song (on the artist’s website preferably) if you listen to it more than 5 times, and having the awareness of converting at least once a month all this streaming bonanza into an album or single purchase , depending on your budget.

There are excellent online music store like Bandcamp, which is my favorite outside of my website, whose 15% share on sales is ethical for musicians. You can also find plenty of independent and original artists there, for those who like to discover other things.

We should be able to merge fairly the different ways of enjoying music. The old “paying” way and the new way in which most people, especially younger generations, are influenced to think that music has become virtually free. As an artist, I feel pushed to be a part of a greedy system that seriously devalues our profession and that leads society, gently and treacherously, towards a cultural impoverishment, since artists with innovative ideas that are not calibrated by mass marketing have a really hard time surviving, not having the promotion budget of a big label in order to generate very high volumes of streams and thrive.

To me the solution comes from the individual, through the evolution of consciousness of the user by being informed and enlightened. May people share their music consumption between streaming and buying. May parents and grand-parents teach their young the value of paying for music and not only a streaming subscription, surely at a bargain price, but unfair for creators.

As far as I’m concerned, Whiteval is not available on big mass streaming platforms for now, but I don’t know if I’m going to be able to continue like that for long.

I am trying to find a fair balance, and I’m still searching how I’m going to approach this. I can however conceive to occasionally upload a song for streaming that would have a particular emotional or spiritual reach, so as to benefit as many people as possible, which would justify the sacrifice of my revenues on that song. But it would be my decision, on my own terms, which makes all the difference.

6. Can you tell us more about your last single "She was an animal”, what is the song about?

“She was an animal” is a true story of a somehow cold person, but who burns with inner passion and longs to connect intensely with another. Faced with this contradiction she turns to telepathy and manages to psychically contact the object of her desire. It is mostly a light song that doesn’t take itself too seriously with its upbeat tempo and driving chorus, but it still raises the question of the existence of telepathy in itself, as well as a fantasy’s effect on the person it is directed to.

For those who want to know more, I speak more in detail about what inspired the lyrics of this song on my blog  whiteval.com/blog

I would like to take this opportunity to thank Swiss radio Couleur 3 who recently played my song on the waves, as well as Radio Chablais who plays it on their playlist these days too.

7. How do you proceed to contact live venues, festivals and the media, this all on your own?

I need to delegate this part of the job. I am producing my own recordings, but I’m looking for a booking agent and financing to pay my future live musicians, as well as a PR for the medias. Any advice from competent and benevolent people is welcome.